There are great combinations in the world – milk and cookies, peanut butter and jelly, Sonny and Cher, and the list goes on.

The last 24 hours of my life has been a rough combination – late night baking, thunderstorms, kids wide-eyed and up all night watching the storm, our dog’s toenails clickety clacking on the wood floors all night from his storm nerves, me not getting even 6 hours of sleep, getting the kids ready for school 45 minutes before school starts because I didn’t know Thursday was late start at 9:30 (aren’t we already starting late at 9?) and I had to work all day, no more staycation or vacations for me.

From the deepest depths of exhaustion I write this blog post tonight. I only write because I’m a total showoff (that’s for you DB) and want you to know that my exhaustion stems from my six baking entries in the Spokane County Interstate Fair.

No drum rolls, no fanfare, just photos and brief commentary.

As you know in previous years, I have won awards at the Coconino County Fair in Flagstaff, AZ.  This year, I thought it would be great to test Coconino County against Spokane County and submit my winning entries.

The very first prize I ever won at the fair was Best of Show for my peanut butter and jelly bar cookies.  My mother in law and I went to the fair with my baby who is now 12 in the stroller.  My mother in law and I whooped and cheered when we saw the Best of Show ribbon on my cookies!  I have a photo of that day somewhere but here is today’s entry for Peanut Butter Jelly Bars. 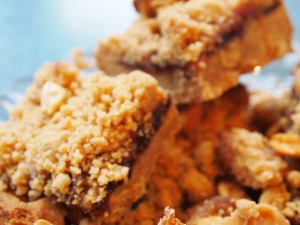 The boys had one after school today and RAVED about them as if I had never once cooked anything good for them, ever.  My husband doesn’t like them.  He didn’t like them the first time I made them and won big, nor this time.  The boys gave him a full ration of grief, I didn’t have to say a word.

I have won more blue ribbons for my pies than anything else I’ve ever submitted.  Of course I had to submit a pie to the Spokane County Interstate Fair!  Today’s entry was an Old Fashioned Apple Pie.  Straightforward and simple, double crust, granny smith apples sweetened with minimal sugar, lemon juice and zest and just enough cinnamon.  I had to make an extra pie for the house (to keep the wolves at bay).  My husband may not like the bar cookies but since last night, he’s already eaten half a pie.

Spokane County Interstate Fair hosts the Fleischmann’s Yeast Best Baking Contest with two categories, one for baked goods (anything goes) and one category for dessert pizza.  I have never entered a brand name contest so why not try for both.  Each category has a $125 first place prize.

For most Thanksgiving and Christmas dinners, I make Parker House Rolls that the family loves.  I modified the recipe I typically use to abide by contest rules and hope for the best. 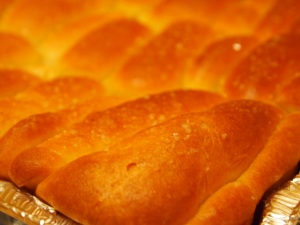 The second category, dessert pizza, is the main reason I was up later than I should have been.  I was stuck.  I went into baking last night without a clear plan and I suffer now because of poor planning.  Yet in my cross-eyed delirium last night, I came up with Honey cardamom Raspberry Focaccia.  A crazy combination of recipes from various sources that turned out to be one of the best looking entries of the day.

In August when I signed up to participate in the fair, I felt the need to expand my horizons and push my limits.  Trust me, I was cursing myself last night for my idiocy.  In all fairness to myself, it was a good idea, what wasn’t a good idea was six entries.

For my sixth entry, I decided to go beyond what I know – wheat – and make a gluten-free pie. Suspenseful, right?  For me too.  I won a blue ribbon for a strawberry frangipane tart in Coconino, so why not make it gluten-free for Spokane?  Spokane foiled my plan because they disallow fresh fruit entries.  Instead, I made an almond frangipane nectarine tart with fig glaze.  Turned out pretty good I think, who knows for sure though, no taste tests available as I had to turn in the whole pie!

I’ll let you know the results when them come in!

2 Responses to “Get Your Bake On!”