Spokane schools, as a district wide rule, do not celebrate or acknowledge Halloween on the actual day.  Instead, the Parent Teacher Group hosts a Monster Mash where all students are invited to attend, in full costume, for two hours of fun that includes pumpkin bowling, dancing, a shockingly great science station and snacks.  Having had kids in public schools for 15 years, this is the first I have ever experienced not including a nationally recognized holiday and the first I have ever experienced a Monster Mash.

Yet not celebrating Halloween in school isn’t my biggest issue.  What rubs me wrong is that the Monster Mash is one full week before Halloween, seriously cutting into my sewing, crafting and creativity timeline.  Sheesh!  October has been, forgive the use of this over used phrase, CRAZY BUSY!  Really.  Insane.  Toronto, Columbus, Cincinnati, Denver, Newark, NYC, Chicago filled two weeks of travel for work.  Then I spent three days in Seattle with my family for health issues.  In 30 days I have been home thirteen days.  Four of these thirteen days I had a cold thanks to those germy college students.

So what, suck it up.  Other than the cold, my month has been great, just not enough time that I would like to spend on Halloween costumes.  The past three nights have been extremely late nights.  Burning the midnight oil and multiple glue sticks, two of my three costumes were assembled with last-minute touches this afternoon before the big event.

My 9-year-old decided to be a Raven.  I had read Edgar Allen Poe’s The Raven to him recently and he wanted to be an evil raven with talons and feet and feathers and wings.  He probably wanted to be able to fly too, but I had three nights.  Here’s what he got.

My biggest concern working with feathers was to not make him look like Phyllis Diller in her feather dress.  When my son had a fitting midway through the production process, his eyes welled with tears.  He was not happy when I thought I was more than halfway done.  The costume started as an old Voldemort pullover costume with hood and sleeves.  I glued feathers to the ragged fringe that hung down at the bottom and from the sleeves.  This is where he tried it on.  He wanted real wings.  I really should stop saying that I have mad skills.  My kids have the bar set really high for me and it’s my own fault.  With cardboard, a wire hanger and a whole lot of feathers, the wings on his hands were created, glued to black knit gloves and tied at the wrist for stability.  The mask was a crow’s mask with a yellow beak and gold sequins and black feathers.  I painted the mask black and glued the sides to the hood to create a more rounded look.  Getting his Hanes’ black sweatpants after going to two, not one, but two Wal-Marts to find them added to the time involved in pulling off this costume.  Not my best work, but considering the challenge and the time involved, I think it turned out pretty awesome.

Keep in mind that I have two in elementary school, so the raven was just half of my workload.  My young buck wanted to be Zombie Atlantis or a Zombie Diver.  My mother-in-law sent him this awesome round, costume plush and pliable diving helmet.  Add zombie makeup, green hair color, some hair gel and his own Hanes’ sweat suit (from the same two, not one but two, trips to Walmart), his costume was complete.

My youngest owns every gray hair on my head and there are plenty.  Last night he informed me, after loving his costume all week, that a black sweat suit, representing a black wet suit, wasn’t good enough.  He, being way to damn techno-saavy, pulled up some Google images of real vintage diving suits and he wanted the whole suit, not just the helmet.  Of course.  What was I thinking?

Today, I realized, he just doesn’t like change.  He wanted to wear his store-bought skeleton suit that he has worn two years running.  He just got caught up in the Halloween-I-gotta-have-a-new-costume-hype and had a new helmet costume to start and the ball just kept rolling.

The skeleton costume is too small too, but that doesn’t stop my youngest son.

The Monster Mash was packed with entire families, grandparents, extended family and pretty awesome.  The boys had a blast, my husband and I met new people and we became more familiar with the school.

The class won’t get to sample my fun Halloween wares like these that I made last year, but Halloween is off to a good start. 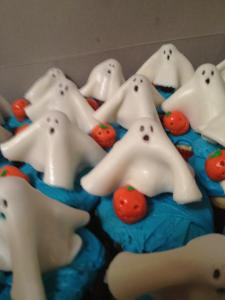 Now one more costume to go….

One Response to “Monster Mash”